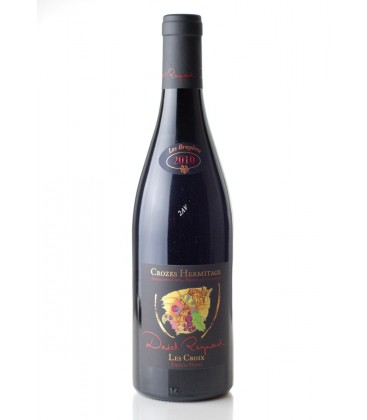 Heir to a vineyard created in the 18th century, David Reynaud took it over at the dawn of the 21st century, in 2000. The property had not always been a vineyard. At the end of the 19th century, it is a place of polycultivation, and vine does not hold an important place.

After World War II, Georges Reynaud, the grandfather, developed the culture of vine, in tune with the expansion of the French winemaking industry. He increased the vine population to 20 acres. Traditionally, most of the polycultivation properties work in cooperatives. All the harvested grapes are brought to a cellar in Tain l’Hermitage. The final direction toward winemaking is given by Marceline, David’s mother, when she took over the vineyard in 1988. She restructured the vineyard and expanded it to 30 acres.

Massive investments are made to mechanise all the work that can be. As soon as he took over the vineyard, David Reynaud bought extra plots and decided to go in organic farming. From 2003 on, David has vinified and marketed his wine according to the principles of biodynamics. In this approach, he decided to buy egg-shaped concrete vats for the white wines. It seems actually that these favour wine fermentation and ageing. This is not refuted by the fruit purity and richness present in all his wines. With a phenomenon called ‘Vortex’, a circular flow is created in the vats, which enrich it without making it heavy (other famous winemakers, like Laurent Combier, also use such vats). The vines are cultivated on the slopes of Beaumont-Monteux, made up of calcareous-clay terraces situated on a draining soil with detrital pebbles. For the wine ‘Les croix’, the syrah – the unique varietal used - vines are on average 55 years old. The yield is moderate, with 15 hl/acre, which roughly equals to 15,000 bottles per year.

On that beautiful winter day, we decided to have pot-au-feu. After three and a half hours of cooking for the meat, I only have to add the vegetables and to cook for 40 more minutes. Time has come to open the bottle of ‘Les Croix’ 2010 by domaine des bruyères. The smell immediately reveals flavours of black berries and violet, with a mineral touch. The taste confirms this feeling, thanks to a taut, chiselled and straight structure. The balance is mastered, there are numerous tannins, that are supple and that bring suppleness to the wine. Overall, the wine is delectable and classy. We were 4 to taste it at the aperitif, and we had to open another bottle to accompany our lunch.

30 Other products in the same category